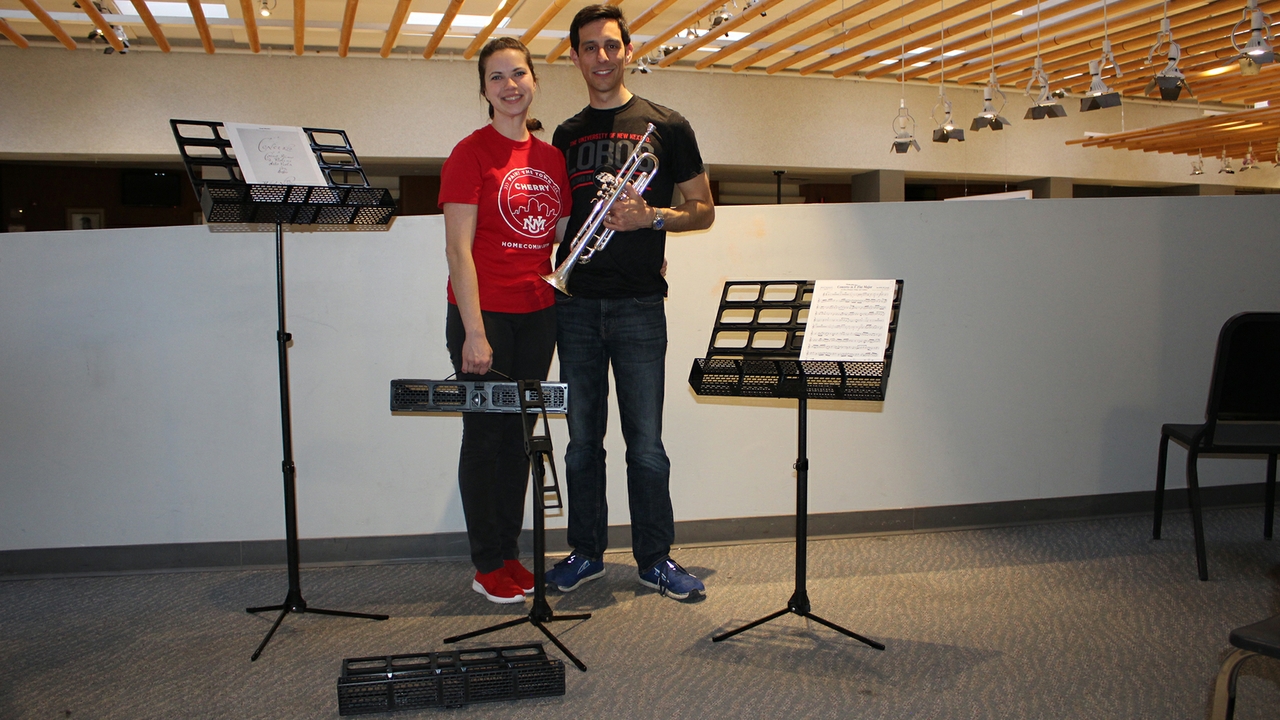 Tim Mallette, a University of New Mexico graduate student working on a master’s degree in music performance for trumpet, bought a great music stand a few years ago. He liked the product so much that he and his wife Tracy, a Ph.D. student in biomedical engineering, bought the business that made the stands. Now they’re working hard to market and grow their Desca Music Stands business.

Although they didn’t win, the couple took their musical pitch to the 2019 Comcast Pitch Deck Competition that helps student entrepreneurs grow their businesses. Hosted by the UNM Innovation Academy and STC.UNM, the competition seeks early-stage business models that demonstrate a market-tested ability to adapt to customers’ needs. It is open to teams led by one or more students enrolled in a New Mexico college or university.

“When I saw their pitch video I thought what a cool idea it was. I think it’s a really neat space they’re working in. There aren’t many people trying to get into the music stand niche. It’s so neat I bought one myself,” said Innovation Academy executive director Robert DelCampo.

Tim and Tracy are both musically inclined. “Tim does most of the musician-ing, but I do sing with the University Chorus here. I was more involved with band during my undergraduate degree, but I don’t have as much time now,” Tracy said. Tim plays in wind symphony, orchestra, jazz band, and the mariachi ensemble at UNM and also does some freelance work for weddings and other gigs.

The Mallettes bought the music stand enterprise when the high school physics teacher who owned the business retired and put it up for sale.

“Since Tim had purchased one stand a few years ago, he got the email that the business was for sale. We have talked about owning our own small business for a long time and this opportunity really seemed perfect for us. We went and saw the operation as it originally was in Colorado and decided to purchase it and move it to Albuquerque,” Tracy explained.

“What inspired me to buy the stand, I think, is the same reason everyone else buys it. I was looking for a normal size music stand that is still stable and folds up to a compact size,” Tim said.

Anyone who was in school band or orchestra may remember the cheap, flimsy metal music stands that bent easily and fell over at the slightest breeze. Another type of music stand is sturdier but also heaier and not very portable.

The Desca Presto resolves those issues. It’s sturdy, stackable, has a deep shelf, folds up into itself in a 3.5 by 20-inch container with a built-in handle. The legs are cold rolled steel, the stand tubes are fiberglass, and the desk is injection-molded ABS plastic – the same stuff Lego is made out of. The Presto also extends taller than most stands and a taller version is in the works. The couple are also considering an improved stand light.

The Mallettes also offer the Fholder, a sturdy folder designed so sheet music won’t fall out and won’t blow away when playing outdoors. The “h” in Fholder, they note on their website, is pronounced the same way as the “h” in Cool Whip.

The Mallettes build the stands themselves using perhaps a bit more DIY than they originally anticipated.

“We had a delay with the vendor who makes the steel legs for us. If we would have waited for them to deliver the parts, we would have been out of stock for almost five weeks. Not what you want when you only launched a month and a half earlier. So we decided to make them ourselves,” Tracy said.

“We both learned to use the plasma cutter at the CNM FUSE makerspace. Now we’re pretty good at it and it is going to save us a lot of money doing them ourselves. Plus, the flexibility to make them as we need them is so important,” Tim noted.

“One thing that we’re proud of is that the stand is made in the U.S., from U.S.-sourced components. A reason we wanted to start a small business is so that we could be a positive impact on our local economy. As we grow, I hope that we can increase that impact through sourcing locally and giving back to the community with a portion of the profits. My dream is to be able to sponsor scholarships for Albuquerque students to go to band camp which had a very positive impact on my life,” Tracy said.

Their experience at UNM has helped them in their venture.

“Yeah, I was thinking about how lucky it is that we’re students,” Tim said. “The reception by the faculty at the school and the students at the school, their excitement about students having a business has been really surprising.  Musicians know a lot of people, and people all over the country. I’m living inside a network of people that are customers for the future and know someone who might want to buy one.  It would be really fun to work with students in Anderson school to develop more of our marketing plan and get our business out there. We applied to be a part of an advertising campaigns class this semester and it didn’t work out, but we’re really hoping to do something like that in the future.”

“I’ve been to a few workshops put on by STC.UNM about business startups. We went to the open business hours for Small Business Development Center at the Lobo Rainforest and plan to use more of their mentoring services in the future. Any time I tell someone from UNM about our business, they instantly want to help and really want us to succeed. We’re only a few months into this and already there have been unforeseen challenges. To have the UNM community encouraging us has made getting through those things a lot easier,” she said.

The plan now is to grow the business. According to Tim, their goals are to get in a limited number of music stores, go to smaller music conferences that attract their target market, and use social media to get word about the product out there. (You can follow Desca on Facebook and Instagram.)

“The original owner was a great inventor but told us when we bought the company that he didn’t really know anything about marketing, so the presence is fairly small right now,” Tracy observed. “What’s great is, people really love the product. Our conversion rate on our website is high and we can see in our sales that when someone buys one in a small town, we often get another sale from that area in one or two weeks. So, like most new businesses, we just need to get it in front of more people. We really want to utilize our different networks to do that at the beginning and UNM is going to be a big part of that.”

Wishing you all the best. Keep in touch and keep moving forward.

This site uses Akismet to reduce spam. Learn how your comment data is processed.

Free shipping across the US! $5 flat rate shipping to Canada and Mexico.